Only the second Buster Keaton film and we’re already in love. He is so incredibly physically gifted, and when you combine that with his stony face you cannot avoid falling for him.

The plot is not overly complicated, but it works. A boat captain, Steamboat Bill, is being forced out of the business by a mogul named King(!). Simultaneously, the captain’s estranged son, the eponymous hero, is coming to see him for the first time since he was a baby (the son that is – not the father). Bill, Jr. is nothing like his father pictured or wanted which leads to one of the best make-over scenes in history.

Bill Jr.’s relationship with King’s daughter is also a source of discord between father and son. They have a kind of Romeo and Juliet-thing going on except with more slapstick and less murder and suicide.

If you ever need an excuse to watch Buster Keaton being awesome this is it (not that anyone needs an excuse). The main part of the film is just him doing spectacular stunts and showing off his (pre-B-Boy) power moves. It’s hilarious and awe-inspiring, and you can watch the whole thing here. It’s also educational; among other things we have now learned that coconut shells were the legos of the 1920s (in terms of damage to bare feet). If you need further prompting, Steamboat Bill, Jr. includes one of Keaton’s most memorable moments; the house falling-scene. 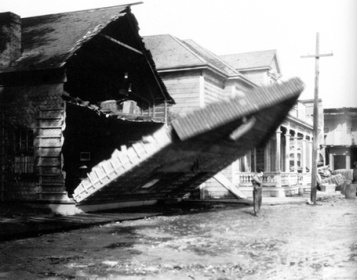