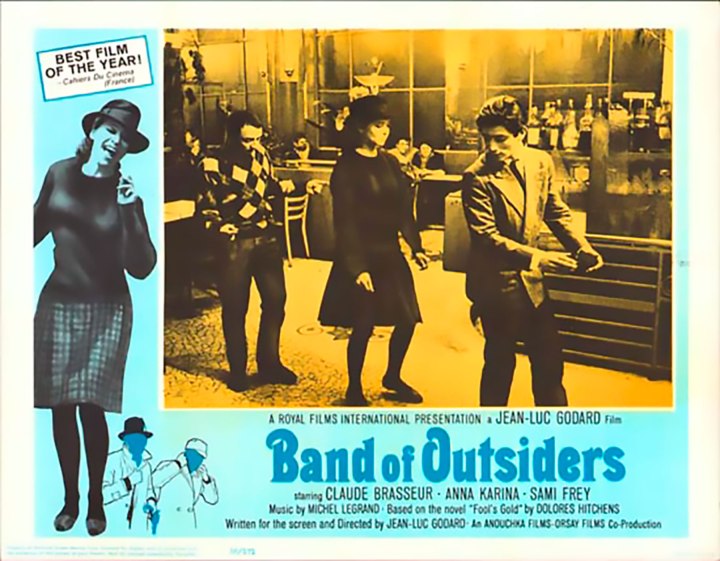 Odile (Karina) attends an English class where she meets would-be “American gangsters” Franz and Arthur (Frey and Brasseur, respectively). For some reason, she is charmed by these juvenile and annoying guys, and after being negged into submission she finds herself a key player in their “master plan” to rob her aunt’s employer.

Don’t get us wrong, there were things we liked about this movie. It’s very stylish, and there are fun and interesting bits such as the minute of (complete) silence. We really enjoyed the dance scene in the café (which you can watch here) and the record breaking tour of the Louvre as well.

We just could not deal with the characters. Odile is very simple, bland and easily manipulated, and Arthur is a negging dick, so they’re clearly meant to be. Franz is just boring, and both him and Arthur are playing at being American gangsters despite being far too old for that sort of behaviour (they both look about 40 but act like 15-year-olds). We’re at a loss to see how Odile would feel a need to impress these two and we fail to see her motivation.

We just found them all really annoying and boring. Then again, this might be our own fault as we are probably expecting too much traditional character development from a French new wave classic.

We did love Mme Victoria (Colpeyn), the dog, the over-the-top death scene (won’t spoil it by saying whose), and the voice over – particularly at the end. It was just that the main characters irked us. A lot. And we found it difficult to see past that. Sorry, Godard (and Edgar)…

What we learned: Come on, Godard. Odile certainly was not thinking about her boobs all the time. Despite popular opinion, women spend very little time actually thinking about them. They’re just kind of there…

We’re back! After charging our batteries in lovely Vietnam (you must go!) we’re ready for another year of classic A-, B-, and C-movies, starting with the very silly and charming A Shot in the Dark. 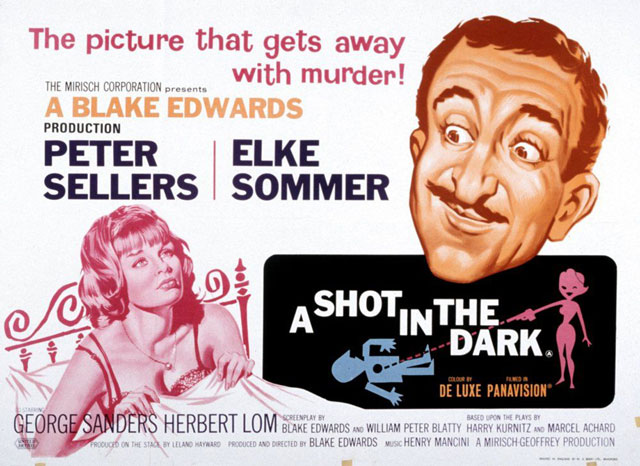 We open on a series of illicit affairs and romances all taking place in the same building, and the scene ends in a shot. In the dark. And then a dead chauffeur. Enter Inspector Jacques Clouseau (Sellers).

The incompetent and clumsy inspector is the only one convinced that main suspect, the beautiful maid Maria Gambrelli (Sommer), is innocent, and he sets out to prove this. In the course of his investiation, the bodies keep piling up and his superior, Commissioner Dreyfus (Lom), is gradually driven mad and homicidal by Clouseau’s apparent bungling of the case.

The plot is not really that important though. This is all about the gags, and they are numerous and hilarious.

There are so many things we adored in this movie. We particularly loved Kato and his sneak attacks, the lethal (and multicultural) date night, all Clouseau’s disguises, and the synchronising of the watches. However, the gags are too numerous to list, and the entire movie is just a masterclass in slapstick and physical comedy.

We were slightly traumatised by Sellers using our dad’s old guitar to cover up in the nudist colony (we swear it’s the exact guitar!) but otherwise we had a blast with this movie. Often, we become frustrated and annoyed with bumbling, incompetent characters and farces, but Sellers is so damned good that in this case we were just charmed instead. Well done, Edwards and Sellers!

What we learned: We suspect everyone. And we suspect no one. Also, no fabric is safe around this man.