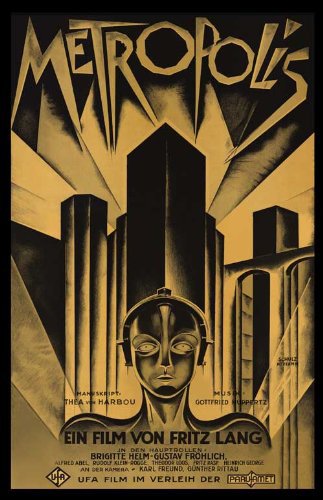 Another classic we’ve seen before (also the second film so far that we actually own on DVD), but it’s been years and this is definitely a masterpiece worth rewatching. It’s a sort of dystopian biblical apocalypse story which follows this old, worn-out narrative:

Boy sees girl; boy follows girl; boy finds out father is an evil tyrant; boy goes undercover among the oppressed; boy presents as Messiah to girl; girl is replaced by evil robot; evil robot instigates murder and riot; girl tries to save the children; girl is accused of being a witch; and you know how this all goes. If you don’t, we don’t want to spoil it for you. Yes, the film is almost 90 years old, but a lot of people have not seen it and they should!

This is a stunning piece of cinema in every sense. It is epic in scope, beautifully shot, superbly acted, has amazing choreography (especially the sequence with the workers in the beginning) and incredible visual effects.

Much of the film seems an obvious source of inspiration for other works, and there are naturally many biblical allusions; to Babylon, the Great Flood, the seven cardinal sins, the Golden Calf and the Tower of Babel in particular.

One can spend months analysing this film, and perhaps one should, but we still have at least 994 films to go (damn you, fluctuating list!) so we’re going to have to wrap this up. If you haven’t seen this film, you should. Go watch it right now! It’s on YouTube – you have no excuse.