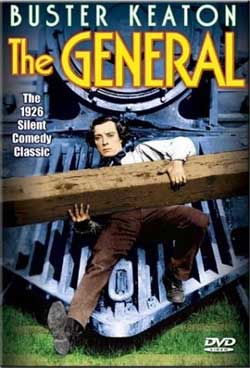 After the soulshattering experience of watching a penniless prospector becoming a multi-millionaire and getting together with the woman he loves in The Gold Rush, we needed something heartwarming to lift our spirits. What better then, than a comedy about a train engineer working against the odds to become a lieutenant in the Confederate Army during the American Civil War!

Buster Keaton plays Johnnie Gray, a train engineer who tries to join the Confederate Army during the Civil War but is rejected. His girlfriend, whose brother and father both enlist, believes him a coward and breaks up with him. A year later he gets the chance to prove himself when Union soldiers highjack a train and inadvertently kidnap Gray’s now ex-girlfriend. He follows them, finds out about the Union Army’s plans, rescues his girl and highjacks another train to get back and warn of the oncoming attack.

The stunts and train sequences in this film are spectacular, and the main character is likeable. Even the girlfriend isn’t completely useless, which was a nice departure from some of the other films we’ve watched so far. Also Buster Keaton has the best face ever in show business.

The General is funny, beautifully shot in places (such as when he sits on the side of the train and it starts running), and it has some amazing comedic and dramatic scenes on the moving train. Never has rooting for the Confederate Army been more fun!