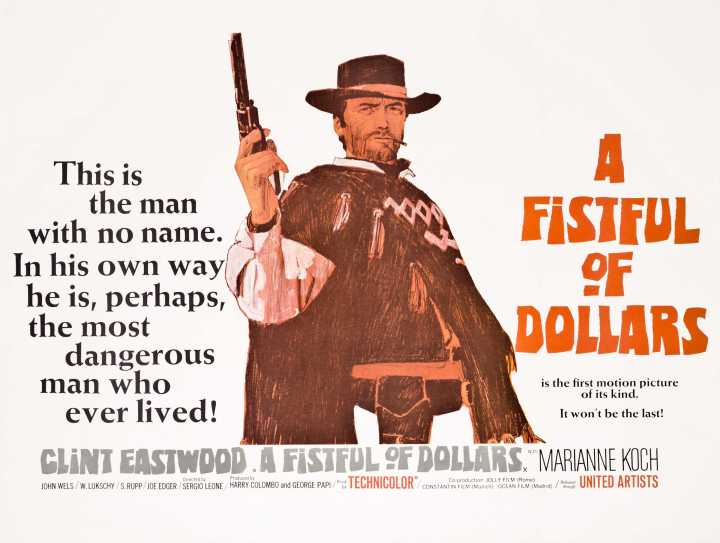 A lone rider in the Wild West (Eastwood) arrives in a one horse town. On his mule, so he doesn’t accidentally upgrade the town’s status, mind you. He’s very considerate like that. He learns from an innkeeper that the village is plagued by two rival families vying for control, and decides to clean up the town before he moves on.

To get rid of the Baxters and the Rojos, the rider (a.k.a. Joe and/or The Man with no Name depending on who you ask. We strongly feel that the first option sort of cancels out the second and vice versa, so we’re very confused) will offer up his services to one family, then to the other, trick them and watch them undo each other. And he will look good doing it, dammit!

There’s the innkeeper, a coffin maker, a young mother who’s been gambled away in a game of cards, a brutal beating of our hero and a long, secret convalescence before the final showdown. Sound familiar? Akira Kurosawa thought so too…

The story is not just inspired by Kurosawa’s Yojimbo, but a blatant rip-off. Despite that, it is still a great movie in its own right. We love a good spaghetti western as those were the movies we grew up with, so while we still prefer the Japanese original (swords beat guns any day) we really enjoyed revisiting A Fistful of Dollars.

We adored the young Clint Eastwood (and his luscious, luscious hair), his poncho, the noose when he rides into town, the weatherbeaten faces of the townspeople (although we think Kurosawa did even that a bit better), the dubbing, the soundtrack (by Ennio Morricone of course), and the finale. Such fun!

What we learned: Clint Eastwood is cool. Very cool. But not even he is as cool as Toshirô Mifune.