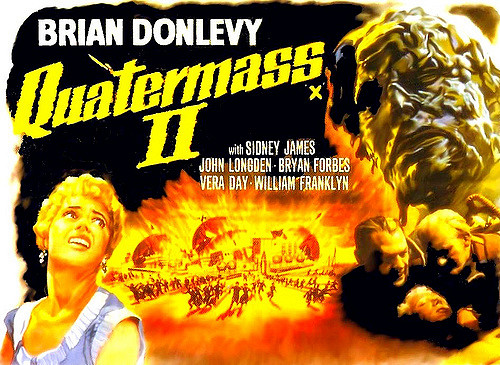 Small meteors keep falling near small British village Winnerden Flats, much to the interest of Professor Quatermass (Donlevy). Frustrated with the dried up funding for his lunar base project, the professor decides to look into the strange meteors, only to find a fully constructed lunar base right on the outskirts of the village.

The entire area is under military control, and when Quatermass’ colleague Marsh (Forbes) is injured by whatever emerges from the gas in the hollow non-meteors, the two are separated; Quatermass is escorted away and Marsh is sent to the base for medical attention.

With the help of an MP, our hero manages to score an invite to inspect the base, which is supposed to produce synthetic food. But what he finds there is far more sinister than GMOs…

Like The Quatermass Xperiment before it, Quatermass 2 is the Hammer film version of a BBC series, and it’s a great little sci-fi adventure.

There’s Cold War paranoia, conspiracies, propaganda, brain washing, alien colonization, pretty blondes, and mystery – everything you could possibly wish for in a science fiction horror. Like Invasion of the Body Snatchers and The World’s End (2013), people appear normal and as they’ve always been, but something profound has changed which is hard to pin down. Add to that military operations and creepy gas masks, and you’ve got yourself an uncanny little gem, which we thoroughly enjoyed.

A fun way to kick off the next 50 films!

What we learned: Everything will be answered later.