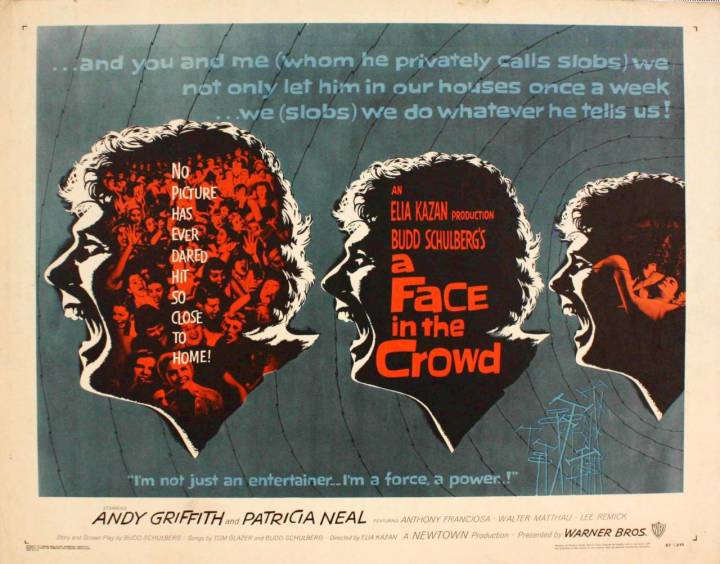 Marcia Jeffries (Neal) is a small town radio reporter who makes a show called “A Face in the Crowd.” As she has the brilliant idea of recording an episode in the local jail, she discovers charismatic drifter Larry “Lonesome” Rhodes, and his music and personality make him an overnight sensation.

Marcia and her uncle, who owns the radio station, give Lonesome more airtime and soon his popularity spreads across the nation and, via Memphis, he ends up as a TV personality and big time influencer in New York.

On TV, Lonesome Rhodes is a down-to-earth country boy with a heart of gold and grass root wisdom to spew. However, in real life Larry is a selfish scoundrel of a con man who grows increasingly madder with his newfound power and political influence. Marcia, who has fallen in love with her discovery despite being a very smart woman, gradually realises that she has created a monster…

In many ways, A Face in the Crowd is more relevant now than it was in 1957. The popular media’s influence on politics, the TV personality’s power over people’s thoughts and opinions, and the yes-men surrounding the star enabling his delusions are all more prominent now than ever.

While funny at times, and dramatic at others, it still plays more like a horror movie in many ways than a drama, particularly since it really nails a lot of nasty truths about society and politics.

Weirdly prescient and very unsettling, A Face in the Crowd should be watched by all.

What we learned: Fame is a fickle friend.