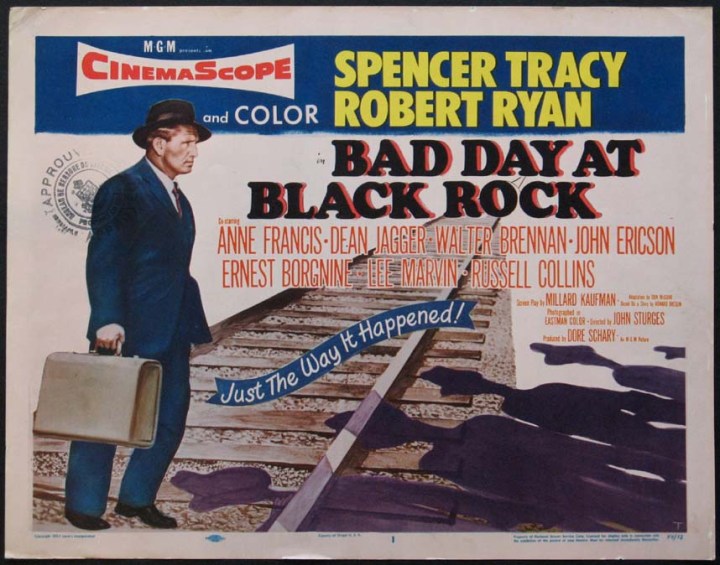 The tiny town of Black Rock is amazed to see the train actually stop for the first time in four years. Even more puzzled, and suspicious, are they to find a stranger getting off in search of a hotel room and a cab to take him to Adobe Flats.

The stranger, John J. Macreedy (Tracy), is met with hostility from all sides, mainly led by Reno Smith (Ryan) who everyone seems to be afraid of. The hostility increases when Macreedy reveals he is looking for a Japanese-American farmer named Komoko, and he is served a story of Komoko being relocated in the wake of  Pearl Harbor.

As Macreedy is trapped in the town for the night and all lines of communication with the outside world are sabotaged by local followers of Smith, vet/undertaker Doc (Brennan) is the only one willing to help him. Doc reveals that Komoko is dead, although the details of his death are still unknown to our hero.

Smith and his croonies, most notably Coley and Hector (Borgnine and Lee, respectively), no longer operate under any pretense of innocence, and the chances of Macreedy surviving the night grow smaller and smaller.

Bad Day at Black Rock is an exciting and tense murder-mystery-western with a crime at the centre of the plot which is strangely (and sadly) relevant to our own times and political climate. Macreedy is a stoic badass, yet you’re never sure things will go his way or who he can trust. The men in this one-woman-town must make some tough choices and decide whether or not to make up for the mistakes that were made four years ago.

There’s nothing not to love about this film. It’s shot in Eastman Color and Cinemascope, and beautifully so. There are car chases, shoot-outs, bar fights, Dames (well – just the one dame, actually), murder, mystery, and mayhem, and we loved everything about it. Loved it!

What we learned: This is a local town for local people. There’s nothing for you here! Alternatively, they don’t take kindly to strangers round these there parts.