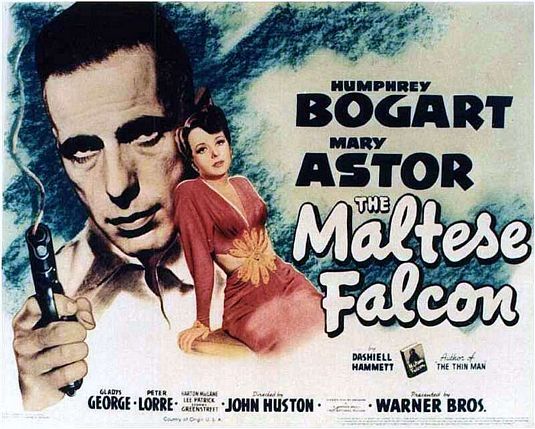 Samuel Spade (Bogart) is a San Francisco P.I. working with partner Miles Archer (Cowan). One day, a dame (Astor) walks into their office. And what a dame. Legs up to here and an air of desperation about her. Just the way Spade likes’em.

Now, this dame is looking for her missing sister, and she knows the lowlife who has her. She pays up for a stakeout and Archer, whose wife Spade is incidentally screwing, ends up dead on the job. Spade has a fairly laissez-faire attitude about the whole thing and proceeds to remove Archer’s name from the company window and door. He is nothing if not efficient and practical.

Of course, the dame isn’t telling the truth. She’s lied about her name, her intentions, and the identity of the man she wanted located. In fact, she’s caught up in an international conspiracy involving a golden falcon artefact, more than a few shady characters and several murders. It’s not long before Spade has a new visitor – Joel Cairo (Lorre) who tries to get the jump on the P.I. But one does not simply walk into Spade’s office and threaten him. Or, if one does, one leaves with one’s tail between one’s legs. Or in a body bag. Luckily for Cairo, the former is the option Spade goes with. This time.

Once Spade is properly roped in, the dame, whose real name is possibly Brigid O’Shaughnessy, although she goes by several pseudonyms, drops her act and comes clean. More or less. Meanwhile, Spade has his own fun, pitting the various bad guys against each other and playing on their greed to manipulate them.

The Maltese Falcon is a classic for very good reasons. It’s a wild ride from start to finish and Bogart is amazing in it, as are the others, but he really steals the show (along with his secretary Effie (Patrick), who we also loved). Spade is cynical and tough, but he also has a lot of fun and seems to enjoy his work and the challenges his opponents throw at him. Despite his methods (and his relationship with his partner’s wife) he has his own moral compass, and not even a desperate dame can make him stray from his convictions.

Love this one – can’t wait for more noir!

What we learned: don’t get caught up in a drama revolving around a figurine. Also, never try to make a detective into a criminal.