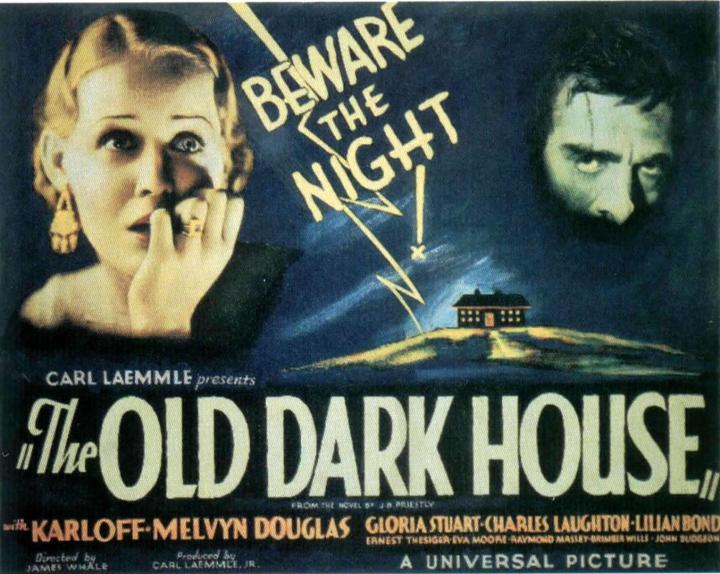 Sometimes titles are just a perfect summary of the plot. A bickering couple in a car are caught in a storm and soon the road is undrivable. Luckily(?) for them and their hoot-and-a-half passenger (Douglas, who’s amazingly sarcastic and funny) they spot an old (dark) house and make their way there to take shelter from the storm. It seemed like a good idea at the time.

Upon knocking on the door, they are greeted by The Karloff who mumbles something incoherent to which Douglas comments “Even Welsh ought not sound like that!” Karloff turns out to be the dumb servant to house owners Rebecca and Horace Femm (Thesiger, who looks strangely like Lon Chaney in Phantom of the Opera), an old creepy sister and brother duo who are less than thrilled about their unexpected visitors. It’s almost as if they’re hiding something in the house they do not want outsiders to see… Still, they reluctantly invite the guests to stay the night and offer them dinner.

Soon, another couple join them as they too are caught in the storm. This does very little to raise the spirit of Ms. Rebecca Femm (no one can have beds!) but romance blossoms and drinks are had.

This film was awesome! It’s one of the ones we’ve heard of several times but have never actually seen before. While we expected suspense and horror, we were not at all prepared for how hilarious this film truly is. The dialogue, the gags and the characters, not to mention the use of wonky mirrors and shadows to create the eerie atmosphere, all make this another new favourite to play at parties (which might explain why no one comes to our parties). We’ll definitely watch it again at some point.

What we learned: This is a local house for local people – there’s nothing for us here!