General Jack D. Ripper (Hayden) has gone cray-cray trying to protect his precious bodily fluid from the commies, and orders an attack on the USSR.

Group Captain Lionel Mandrake (Sellers), on loan from the Royal Air Force, soon realises that the attack is Ripper’s doing and no orders have come from the President or Pentagon. He tries his best to stop the general before a full blown nuclear war breaks out, but this proves difficult as Ripper is the only one able to communicate with the attacking B-52 bombers.

Meanwhile at the Pentagon an emergency meeting is called, with President Muffley (Sellers) and General Buck Turgidson (Scott) in attendance. And also former nazi scientist Dr. Strangelove (Sellers). As if things aren’t complicated enough, the assembly learns that the Soviets have a “doomsday machine” which, if struck, will render the entire earth uninhabitable for close to 100 years.

This. This is the movie which sparked our love of classic movies back when we were young. It is just so damned entertaining, and strangely accessible, despite its serious subject matter (and black and white photography which will on occasion put people off).

From the opening, to Vera Lynn, you will be completely engaged. It is beautifully and interestingly shot and the characters are utterly amazing – not just the ones played by Peter Sellers. Also, there’s a cowboy riding a bomb.

Dr. Strangelove is frightening (the scenario was not entirely improbable and outlandish for a while), but also hilarious, sad and brilliant, and we love everything about it.

What we learned: Peace is our profession.

We’re back! After charging our batteries in lovely Vietnam (you must go!) we’re ready for another year of classic A-, B-, and C-movies, starting with the very silly and charming A Shot in the Dark.

We open on a series of illicit affairs and romances all taking place in the same building, and the scene ends in a shot. In the dark. And then a dead chauffeur. Enter Inspector Jacques Clouseau (Sellers).

The incompetent and clumsy inspector is the only one convinced that main suspect, the beautiful maid Maria Gambrelli (Sommer), is innocent, and he sets out to prove this. In the course of his investiation, the bodies keep piling up and his superior, Commissioner Dreyfus (Lom), is gradually driven mad and homicidal by Clouseau’s apparent bungling of the case.

The plot is not really that important though. This is all about the gags, and they are numerous and hilarious.

There are so many things we adored in this movie. We particularly loved Kato and his sneak attacks, the lethal (and multicultural) date night, all Clouseau’s disguises, and the synchronising of the watches. However, the gags are too numerous to list, and the entire movie is just a masterclass in slapstick and physical comedy.

We were slightly traumatised by Sellers using our dad’s old guitar to cover up in the nudist colony (we swear it’s the exact guitar!) but otherwise we had a blast with this movie. Often, we become frustrated and annoyed with bumbling, incompetent characters and farces, but Sellers is so damned good that in this case we were just charmed instead. Well done, Edwards and Sellers!

What we learned: We suspect everyone. And we suspect no one. Also, no fabric is safe around this man.

Starring: Richard Lester, Peter Sellers, Spike Milligan, Dick Bentley and a bunch of others, all uncredited

Hooray! We’ve reached number 200 on the list! 20% done! 200+ blog entries! And many, many hours spent in front of the TV! Tonight, we shall toast with bubbles and celebrate, but not before bringing you another very short film review of a very short film.

The Running, Jumping and Standing Still Film is a series of strange and absurd slapstick comedy skits shot in the English country side. The title is almost longer than the film itself, and there’s very little we can say about it other than that it was amusing and reminded us a bit of Monty Python, so we would not be surprised if this was an inspiration for the comedy group. Which, if we’d bother looking it up, we’re sure we’d find was true.

You can watch the whole thing here, and we recommend that you do so.

What we learned: Not a whole lot, really. Perhaps that once you shoot something, you own it..? Or don’t go towards someone beckoning you if they’re wearing boxing gloves..?

Next time: The Virgin Spring/Jungfrukällan (1960) 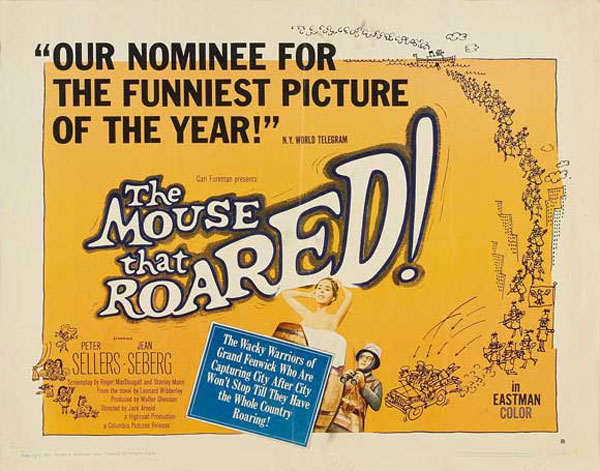 The tiny Duchy of Grand Fenwick is in a financial crisis after their sole export, Pinot Grand Fenwick wine, is priced out of the market by a cheap American imitation. Their solution: declare war on the United States, lose, and collect aid from their former “enemy.”

Unfortunately, through a series of unlikely events they end up winning, and Prime Minister Count Mountjoy (Sellers), Grand Duchess Gloriana (Sellers), and Field Marshall Tully Bascomb (Sellers) must find a way out of their newfound power and notoriety.

The Mouse that Roared is no longer on the list, but we post this in our we-already-bought-the-fucking-DVD-so-we’re-watching-it-dammit category. It’s a very silly and very enjoyable comedy with an excellent Peter Sellers. We loved all the characters, especially the Duchess; the narration, the fox, the army uniforms, and the peace treaty. While no longer deemed good enough to occupy a precious space on the list, it’s still very much worth watching. Such fun!

What we learned: Do not wage war unless you’re prepared to win.

Mrs Wilberforce (Johnson) is a sweet little old lady and frequent visitor at the police station reporting on various observations, who is looking for a tenant for her vacant room. When Professor Marcus (Guinness) shows up looking for a room where he can live and rehearse with his string quintet, she may have gotten more than she bargained for.

Naturally, Professor Marcus and his cohorts (the rest of the men credited) are not what they appear – they are a band of criminals planning to rob a security van at King’s Cross and they want to use Wilberforce’s house, and the old lady herself, as part of their plan.

However, the gang had not counted on Mrs Wilberforce, her observational skills, her morals, or her ability to make them all feel like naughty little boys being scolded by Mother.

The Ladykillers is a fantastic comedy, perfectly cast and entertaining throughout. Katie Johnson, who gets ridiculously low billing, is amazing as the old widow, and her adversaries are all brilliant as well – screen legends as many of them are.

An old favourite of ours, it is always a treat to rewatch it, and we recommend it to everyone with no stipulations. If you can’t get some sort of enjoyment from this, you’re dead inside.

What we learned: Don’t mess with little old ladies.