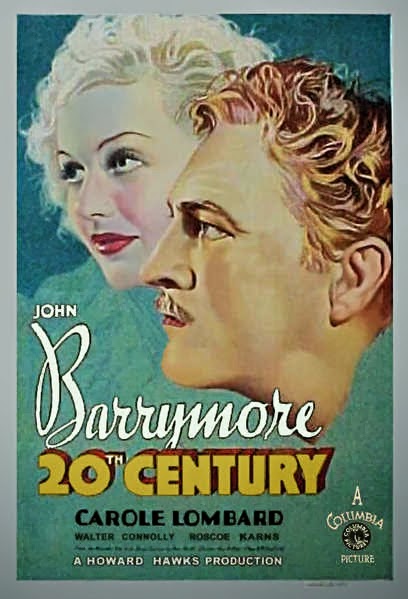 Lingerie model Mildred Plotka (Lombard) has been discovered by theatre producer/director Oscar Jaffe (Barrymore) who wants to make her a star, despite the protests of his coproducers and assistants. He renames her Lily Garland, manages to “mine her performance for gold” and their play is a huge success, making her an overnight sensation.

Fast forward three plays and while their working relationship is still productive and successful, his manipulative behaviour has all but driven her away. When he hires a private detective to watch her every move, she finally has enough and runs away to Hollywood where she becomes a film star.

After her departure, Jaffe struggles to produce another success, fails miserably, and is eventually wanted by the law for dodging debtors. While evading the police, he boards the Twentieth Century Limited, a train where Garland is also a passenger. When Jaffe learns of her presence, he starts plotting how to get her back under his thumb.

Despite both main characters being narcissistic, manipulative bastards, they’re strangely charming and they really do deserve each other. Barrymore’s Jaffe is hilarious and fun in his flamboyancy and in the way he always thinks in terms of staging, and Lombard’s Garland is wonderfully divaesque. With great gags (“Baptist!”) and entertaining supporting characters in the increasingly drunk cohorts, this is a great watch with a bottle of wine and in a fabulous dress on a Saturday night. Or in any other setting, really. We’re not the bosses of you.

What we learned: the old south does not yodel. Also, we never thought we’d sink so low as to be actors.