Charlie Kohler/Edouard Saroyan (Aznavour) is a piano player in a dive bar, but a former classical concert pianist. When his brother Chico (Rémy) seeks him out to shelter him from a couple of gangsters he’s pissed off, Charlie gets dragged back into the criminal family he’s avoided for years.

Simultaneously, the shy and slightly awkward musician strikes up a relationship with waitress Léna (Dubois), but the gangsters follow them one night and the couple are kidnapped. However, they get on surprisingly well with their kidnappers.

They get out of that fix unharmed, but as the gangsters become more and more determined to use Chico’s family members to track him down, Charlie realises he must flee and leave his girlfriend behind. Lest she ends up like his first wife…

Shoot the Piano Player is very different from our last encounter with Truffaut, The 400 Blows. It’s a bit Noiry, with the flashbacks, the past the main character cannot escape, the general bleakness and the occasional voiceover narration.

It’s often sad, dark and depressing, but there are some fantastic laugh-out-loud moments which help alleviate the whole affair somewhat. We’ve been missing the noirs a bit lately (there were so many of them for a while there!), so we really enjoyed this one. Worth watching for fans of French New Wave, Film Noir, thrillers, dramas, and Truffaut in general.

What we learned: Even super polite and likable kidnappers can be ruthless killers. 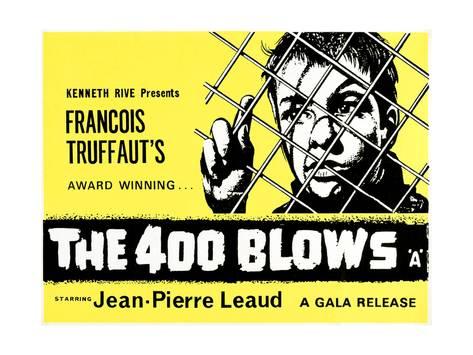 Antoine Doinel (Léaud) is a pretty average kid. He lives with his self-centred mother (Maurier) and nice enough, but very strict, stepfather (Rémy) in a small apartment in Paris. He doesn’t do too well in school and occasionally gets in trouble, although his best friend René (Auffay) seems to be the instigator at least some of the time.

After he’s caught skipping school and lying about his mother’s death to cover for it, Antoine runs away from home. It only lasts for a day or so though, but when his teacher later accuses him of plagiarising Balzac, Antoine runs away again. This time for a while, and with more serious consequences.

Antoine is misunderstood and/or ignored throughout the film. None of the adults in his life take the time to listen to him, and his actions are very often misinterpreted and harshly punished, such as his homage to Balzac and his return of the stolen typewriter (which, granted, he did steal earlier).

We loved The 400 Blows. While it’s a fairly tragic tale of a talented but misunderstood young boy who gets into all sorts of (quite serious) trouble, it’s not all bleak. We loved the P.E. sequence with the rapidly diminishing student body, the centrifugal carousel, the shrine to Balzac and the kids watching the puppet show.

Without spoiling it, the ending is also (possibly) optimistic, with Antoine standing at several thresholds and between two chapters of his life. There are four more films made about the same character played by the same (wonderful) actor, and we’re tempted to make a night of it and watch them all. In about ten years when we’re done with everything on the list…

What we learned: Life is hard for kids. Also, parents have responsibilities beyond feeding their children.